Is the Nexus 7 the D in your BYOD?

By Kevin Brookhouser August 02, 2012
Cue the wailing and gnashing of teeth. The obnoxious Back-to-School signs with their patronizing chalkboards and apples are up. I hated those signs when I was a kid, and I hate them now. Come to think of it, I can't stand most of the imagery associated with my profession. After 15 years teaching, I've never used a chalkboard, and I've never had a student bring me an apple, and that's a good thing.

When I was a kid, the silver lining to Back-to-School season was called a Lamborghini Trapper Keeper.

For some kids and parents today, Back-to-school shopping means shopping for a gadget that can help them organize their school work. Everyone is talking about the iPad, but at $199, The Nexus 7 is a compelling device for those in schools like ours that are encouraging students to Bring-Your-Own-Device. It's great, but it's not perfect. 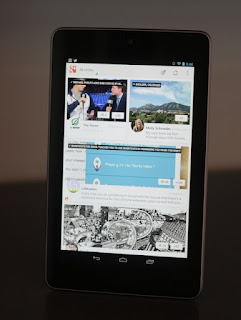 The Nexus 7 is a great BYOD for students who have access to a "real" computer for working on their digital portfolios. If you need one device that does it all for under $300, I still highly recommend a netbook running Ubermix.