Help! Johnny Circled Me in Google Plus 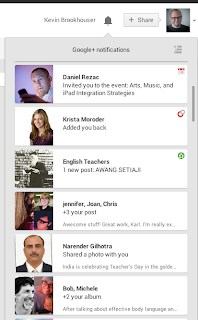 Poor Google+, most people don’t use it very much. If you’re not in the habit of posting articles, photos, or status updates to Google+, welcome to the very large I-don’t-use-Google-Plus club. If you’re a member, you have NOTHING to worry about. Your student who circled you sees nothing because you post nothing. End of story. Ignore the notification.

I post photos and other things to my Google+ circles

One of the features of Google+ is circles. You can have your “teacher” circle, your “spin class” circle, and your “wine book group” circle. Google+ allows you to focus your posts to match your diverse groups of friends, colleagues, and acquaintances. As long as you don’t post publicly or put Johnny in one of your circles, he will not see the posts you submit. Likewise, you will not see his posts in your Google+ feed. Again, you can safely ignore the notification that he circled you.

If you’re like me, you post things to Google+ publicly for the world to see. I do the same thing on Twitter and Facebook. No, I’m not an over-sharer (I don’t think). I have a personal policy not to post anything on social networking sites that I don’t want the world to see. Part of this policy is that I don’t trust Facebook. The other part is that I don’t trust my Facebook friends. Private posts on Facebook can easily become public thanks to a bonehead “friend” from high school. I post publicly on Facebook, Twitter, and Google Plus mostly because I’m always happy to expand my PLC, and public posts help me connect with more teachers, which means I learn more.

Back to the original issue. If you post publicly on Google+, then yes, anyone who puts you in a “circle” can see your public posts. But so can EVERYONE else. The only difference is that your posts will show up in their feed. I still don’t see this situation as anything different than having a public presence on the web (a good idea) and inviting the world to see it.

The Sticky Situation of Circling Students

This situation gets a little weird when you, as a teacher, start including students in your circles. I can imagine many great reasons to circle groups of students. Teachers can share documents, links, and other resources with classes using circles. However, the G+ Circle relationship between students and teachers starts to look very much like the Facebook Friend relationship. Like I said, this relationship is strange to many. I don’t go there.

Most people have a narrow view of what Twitter, Facebook, and Google+ does. According to many, Twitter is for talking about your annoying breakfast (I had tasty fresh eggs thanks to my hens), Facebook is for seeing what happened to your high school friends (the dorks are winning), and Google Plus is for … umm.
The truth is, all of these social networks are simply communication tools. To me, they’re tools that fix the broken system of email, and the sooner we embrace them, the better. Google Plus’s killer app is HANGOUTS!
Until the world accepts these tools for what they are, teachers should use them carefully (and I believe publicly). But when Johnny “circles” you, you can safely ignore that notification.